Although not directly related to Rainham with the 30th anniversary of the Falklands War that took place in 1982 I thought it might be appropriate to share some newspaper headlines from each day as the events developed. These are from papers that were used as part of a research project at the time. 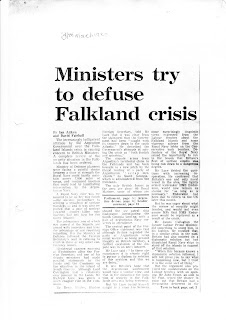 The invasion of the Falklands took place on 2 April 1982 but even a few days previously it was being reported that a crisis was developing. This headline was from 31 March 1982
Posted by J Drew at 18:22 No comments: