The church tower at St Margarets Rainham was open today to allow members of the public to go up and view the local area from the high vantage point. It was interesting to be able to go up and compare the view of Rainham to the last time I went up in 2002. The other difference was that this time I had a 21Mp digital camera to photograph the scene and decided to take some panoramic shots of the views - these shots are 12000 pixels wide - thats the equivalent of a 50 megapixel camera image! 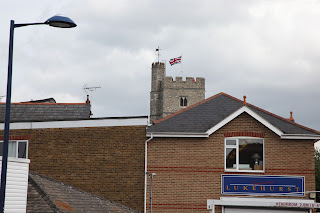 The Guardian Newspaper headlines from the Falklands War: 15 June 1982- Ceasefire in Falklands as Stanley Surrended

The Guardian Newspaper headlines from the Falklands War: 15 June 1982- Ceasefire in Falklands as Stanley Surrended

Labels: The Guardian Newspaper headlines from the Falklands War: 15 June 1982- Ceasefire in Falklands as Stanley Surrended

The Guardian Newspaper headlines from the Falklands War: 14 June 1982- The Final Push to Liberate Port Stanley

Rainham's Coronation Clock - When Was the Coronation of Queen Elizabeth II?

With the Diamond Jubilee celebrations in the UK this weekend Ithought it would be appropriate to post some information about the clock erected in Rainham to celebrate the Coronation.

Kent Family History Society have kindly printed an article written by Alan Makey about the History of Rainham with some information about the Rainham History website.

You can read the article in Vol 13 No 7 of the Kent Family History Society Journal.

This is a video of the Rainham Jubilee parade in 2002 showing iconic vehicles from the previous 50 years. Unfortunately the video isn't fantastic quality - and certainly isn't HD!